This is the first draft of the proposal for a Weather Station at the Creekside Discovery Centre.

I did enthusiastically explain the idea for a weather to Creekside Discovery Centre staff. Indeed the idea had already been mooted by my co-geek Jon San. But nothing speaks of intention like a document with a cover page and an index! So a proposal was drafted and sent. 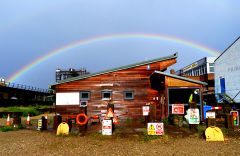 The proposal explains what we intend to do, when, rough costs and an outline of phase two. I hope it’s informative and eye-catching . I hope it inspires it’s intended recipients and other visitors to this site who may be interested in having their own weather station.

The proposal is just that, a proposal. I’ve never installed a weather station so there’s bound to be something I’ve not covered. As this installation is part of my Masters I’m providing most of the hardware and labour, the costs involved aren’t being passed on the Creekside Discovery Centre. As with most projects it’s actually labour that’s are often the largest overhead. The centre is supported by a fantastic body of volunteers and I see no reason not to join them. So it’s really just the hardware costs that become fixed. Raspberry Pi’s sell for under £20.00!! What a brilliant price point for such a phenomenal computer. The DS18B20 sensors are around £2.00 – The CAT6 network cable is probably the biggest outlay at around £100 – but luckily the Creekside Centre had a drum of it already.

So hopefully the proposal will inspire them to give me the go ahead. CDC-Install-DFT-001